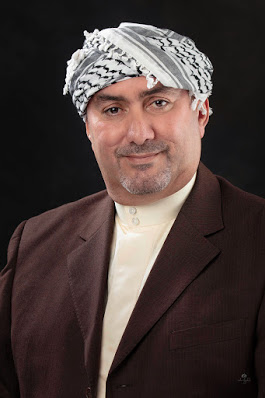 Pomegranate Pictures is excited to announce the attachment of the versatile Iraqi actor, Basim Alameen to co-star in the 2021 production of Pomegranate.

Basim Alameen was born in Baghdad, Iraq, where, in 1997, he earned a bachelor’s degree in Television Directing from the University of Baghdad, College of Fine Arts. In 2010 he immigrated to the United States. As an actor, director, and writer, Basim has performed in two-dozen stage performances, some for television and radio, but mostly in plays where he played the lead. His United States plays include: The King’s Bird, Where are the Arabs?, Silent, No Past No Future, The Miser, The Heir However, Mom’s on Facebook, and the epic Iraqi comedy George Bush. Eight of Basim’s stage performances were in Iraq, nine in the United States, and the rest of his work was done in different parts of the Middle East including Jordan, Bahrain, and UAE-Dubai. Additionally, Basim is an accomplished voice actor, imitating voices of major actors and celebrities. He is will-known in the Middle East for his several dramatic radio and television series that aired in Bahrain, Qatar, UAE-Dubai, and Syria.

Basim was almost discovered at age 9, when his aunt took him to a party in Cairo at the Iraqi embassy where the legendary Egyptian singer Abdel Halim Hafez was performing (Abdel Halim Hafez was the Elvis of the Arab World.) As the crew set up the stage, Basim took the microphone and began singing one of Abdel Halim Hafez’s songs. Everyone tried to stop him, but Abdel Halim Hafez told them to leave the boy alone and told Basim to continue singing. Abdel Halim Hafez clapped for Basim afterwards and recognizing his talent, asked his aunt if she’d permit him to stay in Egypt and attend the Academy of Arts. But his aunt refused, wanting Basim to pursue a conservative career.

Pomegranate, Basim takes on the role of “Sermad Al Mousawi,” Hassina’s husband and Niran’s benevolent father who works two jobs to keep food stuffed in the double-sided refrigerator. Sermad’s a teddy bear of a man loved by all. He dresses well when he goes to work as a short-order cook at one of two restaurants, but around home he lounges with too small T-shirts and pants that ride too low (he lets Hassina wear the family pants). While Hassina wants to marry Niran off or ship her back to Iraq, Sermad encourages his daughter to get her driver’s license, an education, and pursue a career…but all in due time, “What’s the rush?” Sermad is also the coupon cutter in the household, favoring the “Groger” circular. Pomegranate’s writer-director, Weam Namou said, “It’s exciting to have a distinguished Iraqi-American actor and director as part of our cast.”

Pomegranate is a dramedy by writer-director Weam Namou, based on her childhood experiences immigrating from Iraq to the United States, and then as an adult living through the presidential election of 2016. Consequently, Pomegranate is the story about how, in the weeks before the election of Donald Trump in 2016, a young, politically liberal, Iraqi Muslim immigrant struggles to find her footing in a neighborhood of well-to-do, politically conservative, Iraqi Christians, while battling her family’s fears of deprivation and demands of loyalty to Muslim traditions.

Born in Baghdad to an ancient lineage called the Chaldeans, Weam Namou is an Eric Hoffer award-winning author of 14 books, an international award-winning filmmaker, journalist, poet, and an Ambassador for the Authors Guild of America [Detroit Chapter], the nation’s oldest and largest writing organization. She’s the founder of The Path of Consciousness, a spiritual and writing community, and Unique Voices in Films, a 501 (c)(3) nonprofit organization. After receiving a Bachelor’s Degree in Communications from Wayne State University, Namou traveled the world as she studied fiction and memoir through various correspondence courses, poetry in Prague through the University of New Orleans, and screenwriting at MPI (Motion Picture Institute of Michigan). She learned of ancient philosophies from Indian and Native American teachers, and most recently, from internationally bestselling author and mystic Lynn V. Andrews. www.weamnamou.com View more posts